The usual use cases for LTE routers are:

Note, while 4G networks can achieve good speeds, pfSense and other BSD based operating systems don't have good drivers for LTE. On BSD systems the LTE throughput is around 10Mbit/s.

OpenWRT achieves much better speeds - about 100Mbit/s on the same hardware. If you want to use LTE as a main connection, consider OpenWRT or other Linux-based operating system.

Here's a list of 3G/4G modems that have been tested with APU3:

Many other modems are also working well, but have not been tested. if you don't have a modem yet, consider buying one of the listed ones.

pfSense publishes it's own list of known working modems which you can find here: https://doc.pfsense.org/index.php/Known_Working_3G-4G_Modems  many of these modems will also work with APU, but we haven't tested them and don't make any compatibility guarantees.

LTE modems differ in what AT commands they implement and how they expect to be initialized. There's always a little trial and error involved when working with a new modem to get it properly connected.

Multiple cuaUx.x interfaces on one modem

For example, for Huawei there are 5 interfaces present:

In case of this Huawei modem, you need to use the first one (cuaU0.0) for setting up internet connection. Other interfaces can be used for issuing commands to the modem while it's connected or retrieving GPS coordinates. On other modems you may need to use different cuaUx.x interface.

Some LTE modems require initialization strings to be issued before the modem can be connected. pfSense has a number of pre-set init strings, but these are often wrong. The default init string "AT&F&C1&D2E0S0=0M1" almost never works in our experience.

Some experimentation is often needed to get this right.

Modem not being detected

Some supported modems (for example HUAWEI ME909u-521) require minimum 20 seconds of power before they boot up properly. This means that if the operating system boots up quicker than the modem, modem won't be detected.

This can be fixed by adding a delay in the operating system boot script.

When configuring LTE modem for internet connectivity, one must know few things: 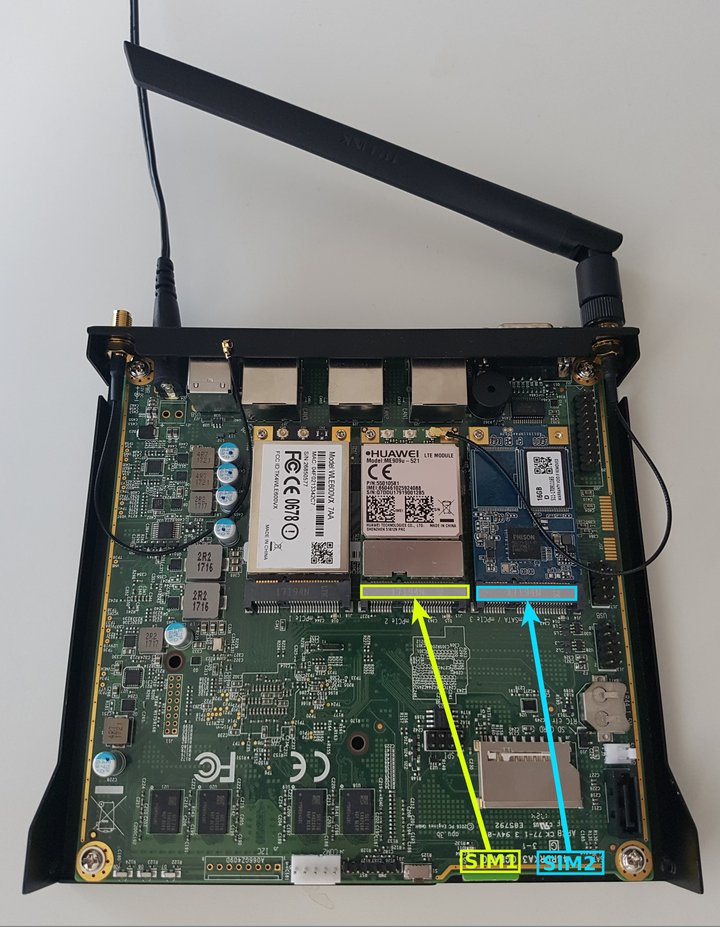 See how SIM slots are connected to the mPCIe ports.

Note: J14 is typically used for mSata SSD drive. If you plan on connecting 2 LTE modems, you must install operating system on the SD card.

Tip: check out many similar articles about LTE configuration in our Knowledge Base.