How to fine-tune pfSense 2.4.4 for 1Gbit thoughput on APU2

Update 2020-06-01: some of the tunables described below no longer work in pfSense 2.4.5. We will look into updating this article in the near future.

As stated in the previous article, APU2 has four 1Ghz CPU cores, pfSense by design is able to use only 1 core per connection. This limitation still exists, however single-core performance has considerably improved. With new BIOS, and settings described below, pfSense can route about 750-800Mbit/s on one connection.

APU2*4 have very performant Intel I210-AT Network Interfaces. These NICs have 4 transmit and four receive queues, being able to work simultaneusly on 4 connections. With some fine tuning, pfSense can take advantage of this and route at 1Gbit when using more than one connection.

The other APU boards (APU2C0, APU2C2, APU3, APU4) have I211-AT Network Interface, with 2 transmit/receive queues. This is less performant NIC, but it's still good enough to deliver 1Gbit on pfSense when more one than one connection is used. Note: the intel PDF specification for I211-AT has a mistake - it states that there are 4 queues while there are only 2.

Previous throughput test wasn't taking advantage of multi-queue NICs, because by default pfSense uses only one NIC queue on APU2, here's how to change this.

Make sure that all 3 first checkboxes under "Network Interfaces" are unchecked.

Now we need to edit some settings from the shell. You can SSH to the box or connect with the serial cable.
To get the full gigabit, edit /boot/loader.conf.local (you may need to create it, if it doesn't exist) and insert the following settings:

After saving this file, reboot your router to apply it.

Now you can run some tests to verify that your settings worked properly. The easiest way it to use iperf3 with multiple connections, where one device is on the LAN and the other one in the internet.

We setup one iperf3 server on the internet, and called it from a host on the LAN.

On the server (somewhere on the intetnet) run the following command

On your LAN run this command:

If everything went well, you should be seeing about 940Mbit/s throughput, similar to the snippet below:

Here's a screenshot from pfSense panel - take a look at the traffic graph. 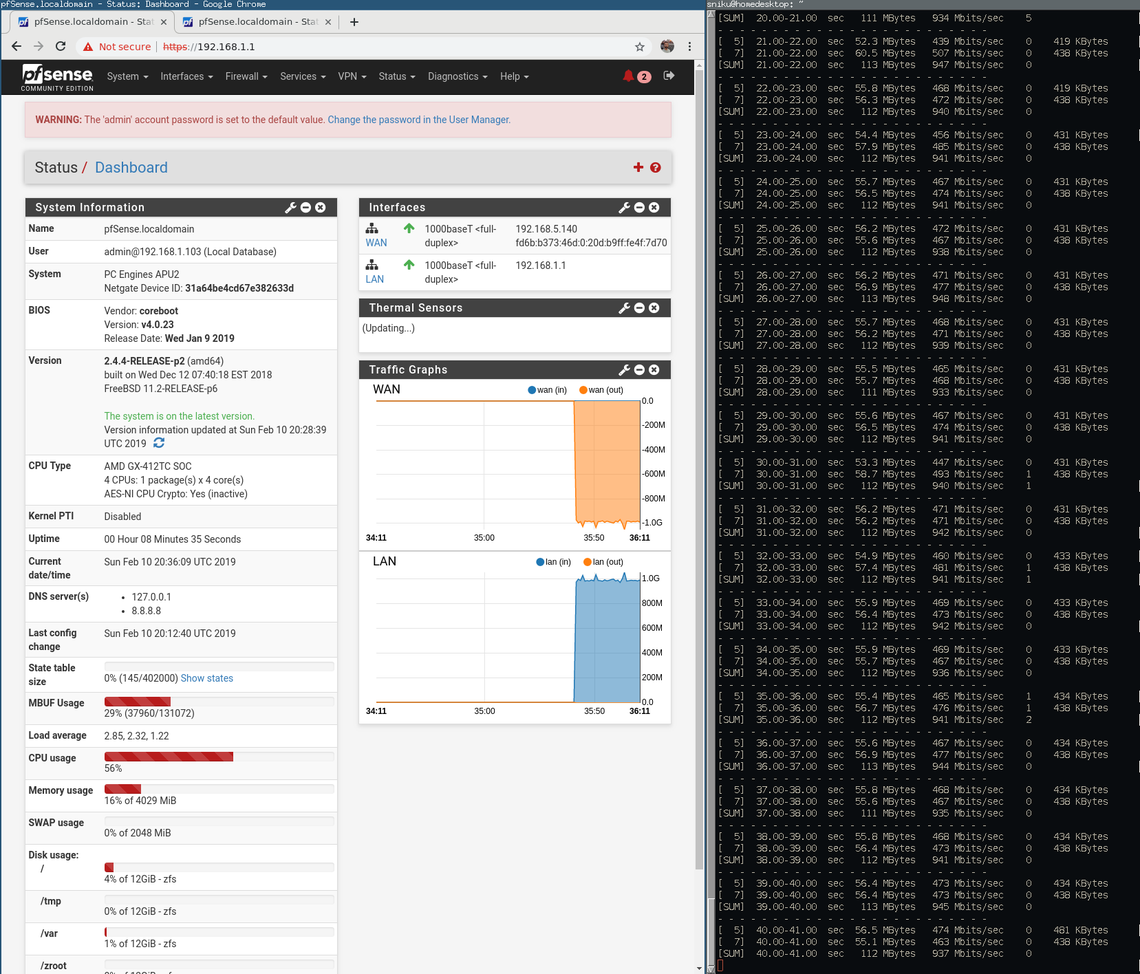 I think this is quite neat. It turns out that internet is wrong :-) . One can get full gigabit on pfSense when utilizing multiple NIC queues and multiple CPUs!

if you have any questions about the above article, mail us at info@teklager.se

Tip: check out many similar articles in our Knowledge Base.